The Transfagarasan road starts (from south to north) in Curtea de Arges and goes up crossing the tallest Romanians mountains, called the Fagaras Mountains in our books or the Transylvanian Alps in foreigner’s references.

After a spectacular section where the Transfagarasan road fights with the mountain slopes like a huge snake searching for its prey, it ends beyond the Cartisoara village, melting slowly into the E68 (European road), about 45km/27miles east of Sibiu. If you are traveling from Bucuresti, you can take the A1 freeway into Pitesti, and then the DN7C (national road) toward Curtea de Arges.

The Transfagarasan road was built between 1970 and 1974 as a strategic military route. After the 1968 invasion of Czechoslovakia by the Soviet Union, Ceausescu had it built to insure quick military access across the mountains in the event the Soviets attempted a similar move into Romania. 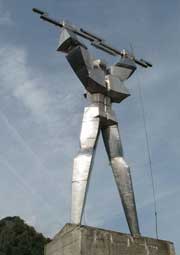 The road was built mainly with military forces at a high cost. They used about 6 million kilos of dynamite on the northern face (this is the most spectacular) and on the tunnel (about 0.9km/0.53miles long). About 40 soldiers lost their lives during the building of it.

Today, the Transfagarasan road is an attraction for travelers, mostly drivers and lots of hikers. But you also meet more and more bikers (with or without an engine attached). Given its layout and altitude, it is generally only open from June to September.

A few kilometers beyond Curtea de Arges the Transfagarasan road starts to face the mountain slope. From here, it doesn’t matter if you do or do not have an engine “on board”, just walk. The landscape is beautiful and quickly changes from beeches and oaks to pines then alpine meadows. You will still need to pay close attention to the road because it isn’t in the best shape.

Those who use their own feet for transportation will have plenty of time to enjoy the views, because they’ll move slower and slower as the slope gets higher and higher.

The road follows the beautiful Arges River gorge. After you travel beyond the last village, Capatanenii Pamanteni (the old name being Poienari), you’ll see the direction sign to Poienari Castle. This is the only castle built by the Romanian Count Dracula and the single castle in romania what can be named Dracula’s castle.

Looking up on the mountains you can see the fortress on the top of a high and remote cliff, about 800 m/0.5 miles higher than the place you’re standing.

If you have good legs, go ahead and start to climb those 1480 steps, which it takes to get to the citadel. You know, a little (only a little!) exercise doesn’t hurt! Once up, I can assure you the view is astonishing.

But, if you’re reluctant to climb all those stairs, just keep moving along the road. After 4km/2.5miles another beautiful view is set up for you. The Vidraru Lake is a man-made lake retained by a 165-meter dam.

Two roads that follow the lake start here. I suggest you to take the right one. It’s the safer one, in a better shape and it’s 3km/2miles longer.

If you choose the left branch (yes, this one offers a better view over the lake) despite my warning just forget the view and concentrate on the road and the signs along it. Pay particular attention to the big stones that can fall down in this section. On the northern part of this road you’ll meet Cumpana Chalet.

Both roads follow the lake’s edge and meet at the upper end of the lake. After 7km/4miles of moving along on the right side, you’ll see Valea cu Pesti Chalet. The road here isn’t the best in the world but I can say it’s OK. At least the holes are filled up.

About 20 km/12miles further, when the road leaves the lake behind, it’s the beginning of the end. The uncovered holes start to make your life a hell. You’ll see more and more holes. And they are larger and larger as you go up. In some places the road can be used for only one lane of traffic. 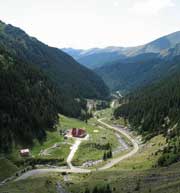 Along the way, you are likely to encounter a waterfall and several scenic spots, well suited for a picnic. You’ll also pass by several chalets/ hotels/B&Bs. Well, I’m not their biggest fan because their services are down to earth, but come at a high price. You know, this is capitalism at work. You will pay the asking price, no matter how high, when you need a warm, dry place in bad weather.

BTW, if you intend to stay over the night in a tent on the top of Fagaras Mountain choose the southern side of the mountain. It’s always warmest (by 5-10 C degrees) and sometimes driest.

Finally you will see the tunnel (the longest in Romania – 887m/0.53 miles) curving to the right as it runs under the Paltinu Ridge. Once again, pay attention! Regardless of the road conditions outside, the road in the tunnel is always wet.

Break time. This is the perfect place to do so. There is parking on the side of the road, just after the tunnel. Or you can take the service road toward the Balea Chalet and the lake for additional parking. There are a couple of chalets/B&Bs offering lodging and a decent restaurant lakeside.

The Balea Lake is glacial in its origins, with clear, icy waters reflecting the peaks above and the ice shelf guarding it year-round. No matter the length of your stop here, you are likely to experience frequent clouds moving across the mountains, and constantly shifting weather. The temperatures are low, most of the time hovering near freezing, 0 C /32 F degrees.

But take your time enjoying the sights and catching some pics. You even can leave your vehicle in a paid parking area for a couple of days (about 0.7EUR/1$ a day) and hike the nearby Fagaras ridge trails.

Ready to go down on the northern side of Transfagarasan road? Stay for a moment and look at the sharp descent of the road. Thanks to God! At least this part is in very good shape. Can you see its jagged and angular character? Of course you can. In good weather, from this point, the road is almost entirely revealed. Look closely and fix in your mind some points where you can safely stop. You’ll need them, because coming down a very steep road is always more difficult than going up. So, take your time and take a break anytime you (or your vehicle) need it. The beautiful landscapes will compete with your attention – but pay attention.

Along the way to Balea Cascada (Falls) you’ll notice the cable cars gliding up and down the mountain. Once arrived at Balea Falls the views are absolutely breathtaking. A 360-degree panorama, running from the distant peaks above, highlighted by the picturesque waterfall, to the wide valley below. At this stop, there is lodging, a restaurant and a cable car that can whisk people up to the top of the road, at Balea Lake. Out of season, when the Transfagarasan road is closed, this is the highest open point on the road.

As you come down, views of rocks, jagged edges and meadows are replaced with dense pine forests. The steep get lower and lower and you’ll end up in Cartisoara village where B&Bs are waiting for you. Good prices (10-20EUR/15-30$ a night), good services and wonderful people. You can visit here the monastery, famous for its glass painted icons.

Further on, the road runs pleasantly through the low hills and a few villages. On a clear day, the majestic peaks of the Fagaras Mountains are clearly visible in your back.

If you find yourself in Romania between June and September, the Transfagarasan road is an absolute must – an amazing and unforgettable experience.