Vlad Dracul the name and its legacy

Many people confuse the father, Vlad Dracul, with the son, Vlad Dracula. Very different persons and names. So, please pay attention! Dracula is not a nickname because he was an evil-devil man. He signed documents with this name long time before the Saxons transformed it in an evil-devil nickname.

In Vlad Dracula time the fight for the throne was given between two families (two brunches of Basarab royal family): Danesti (meaning Dan’s family) and Draculesti (meaning Dracul’s family). In that time it was usual for rulers to specify the family affiliation in their names.

So, when Vlad III become a ruler he called himself Vlad III Dragulea signing documents with this name (and this is a certified fact). And, for God sake, doesn’t mean “The Devil”.

But what could be the meaning of this name?

It means “the son of the Dragon”, after his father name, Vlad Dracul (the Dragon). In old Romanian the suffix “-ea” meant “the son/daughter of”. So, it’s that simple: if the father name was Dracul, the son took Dracul-ea name to show his affiliation.

His father took this name after he was accepted in the Order of the Dragon, a very exclusive knights order. Only princes and knights who demonstrated their skills and faith could be members of this Order.

Do you see how similar are the Latin Draco with the Romanian Drac (the suffix “-ul” from Drac-ul means “the”)? The confusion comes because in the old Romanian the whole family of mythic scary creatures (devils, dragons, demons) had a single word: “drac”. 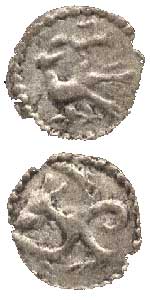 In order to assert his status, Vlad Dracul made the dragon a part of his house heraldry and he even made coins with the same dragon sign. No wonder why people named him Dracul.

So, it’s all about Dragon, not Devil.

It still remains a question mark: the difference between the name Dragulea, found in the signature of Vlad the Impaler and the name Draculea (what means the son of the Dragon). Due to the changes in Romanian language, in time, Draculea became Dracula. But how Dragulea became Draculea? Due to the same old Romanian language? I’m not a linguist and I didn’t find yet an explanation of this.

Saxon people used Dracula name as a nickname with the devil meaning. The Bloodthirsty Monster it’s another nickname given by the Saxon people due to his cruelties committed over the Sibiu and Brasov people, not because he was a vampire. But both names, together with their connotations create the bridge to the contemporary vampire Dracula.

The Impaler, Tepes (pronounced Tze-pesh) in Romanian, it’s a nickname given by Turks(Kaziklu Bey – The Impaler Prince) due to his habit to spread fear and terror between them by impaling them on stakes.

And this is also the name used by Romanian people in their Dracula stories. I can’t tell you who gave him this nickname first. Turkish people or Wallachians? All we know is it was written first by Turkish chronicles. The Impaler nickname was written first in a Wallachian chronicle in 1574.

Also, doesn’t mater if it’s about Vlad Dracul or Vlad Dracula, few people know the etymology of the name, Vlad. It comes from the Slavic word “volod”, what means “power”. The word “volod” is the root for Romanian “voievod” (voivode in English), too.