Romanian pastrami recipe a bit of history and few recipes

I’ll give you the Romanian pastrami recipe in a moment, but first I have to tell you a bit of its history in order to understand the ups and downs of this recipe. For those interested to cook this recipe is better to understand what means the traditional recipe, and what they can do to be close to it.

Did you know that the US pastrami recipe is very close to the Romanian “pastrama” recipe? Yes, “pastrama” is the Romanian name for pastrami. And it isn’t a simple coincidence.

Pastrami came from Romania. Some Jewish emigrants, coming from Romania, brought it in US at the end of 19th century.

Where are the origins of the pastrami recipe, back in the human being history?

Nobody can tell you. Some people will tell you that Turkish people brought it in Romania in the Dark Age. Well, they have no prove, only suppositions. I have another supposition what seems to me more logical.

I have no doubt that many people, in different place on the earth, discovered independently that meat dried in the wind can be preserved for longer time. It’s impossible to say who was the fist. You know, there weren’t offices to certify their inventions.

They also found that salt preserves it even better. In time, they discovered they could preserve it for longer time if they smoke the meat. And sooner or later they start to use different sorts of spices to improve its taste.

Evidence of an old civilization living on Romanian land before 5000 BC shows them as being sheep and cattle breeder or metal and wood crafter. I can’t see the reason they didn’t discover the salted and dried meat secret long before the Turkish people came on this land; due to their basic occupation and the fact that Romania has a very rich in salt land.

2000-3000 years ago, another civilization raised on this land. They were our ancestors, Dacians. And, through the others, they had the same basic occupations as their predecessors. Only they were a more developed, sophisticated and powerful civilization.

Well, “pastrama” comes from the Romanian verb “a pastra”, what means to keep, to preserve. And this word, a pastra, originates in Dacian language.

In addition, it’s a fact that Romanians keep more than 2000 years old traditions, especially in sheep breeding and viticulture fields. Romanian shepherds kept the pastrami recipe in the old traditional way, until today. Their tools and methods could be used 2000 years ago exactly the same way they do it right now.

My conclusion? I won’t say that Romanian ancestors were the only, neither the first making/using this recipe. However, “pastrama”, the traditional recipe and its name, is certainly a Romanian meal few thousands years old.

While foreigners think at pastrami as being a name of a meal from brisket beef, for Romanians “pastrama” is a method of preparation. That means we have old traditional recipes of “pastrama” made from veal (yes, veal, not beef), mutton, goose and pork. Today we have “pastrama” from any kind of poultry, in fact any meat big enough to support the process.

I’ll share you a bit about my experience with this pastrami recipe. I tasted (here, in Romania) three sorts of pastrami, made, in theory, after the same recipe:

Why those differences? I think it’s important because they apply in any other country.

Industrial preparation means profitability. And this translates in less time (sample: for keeping in salt), artificial methods (sample: drying), lots of additives to keep the meat properties and to replace the lost taste due to the big hurry, and machines (a lot of steel what also alters the taste).

My preparation? I tried to respect the traditional pastrami recipe, as well as I could. But it’s almost impossible while living in a communist apartment building. I know that many of you, those interested in cooking pastrami in Romanian way, have few possibilities to do it in the traditional way. So, I’ll give you the mutton pastrami recipe made my way.

The traditional way uses only wooden tools: trough, spoons, forks, wooden platters and barrel. So, you’ll have to reduce at the minimum the contact with metals because it’ll spoil the meat. Also, every little step in the process is natural.

Wash the mutton. Cut of the meat from the bones (try to do it in one single piece). In the places where is thicker than 3 cm make some long incisions, then dry it with a cotton towel. Let it rest on a wooden platter.

Prepare the rub. Crush the garlic gloves in a mortar. Rub it to let its juice. Add all the other ingredients (less the salt and the wine) and mix them.

Rub the mutton with the spices’ mix. Do it vigorously on all surfaces, inclusive in every incision you made. Salt the interior surface of the leg with a bit more salt than you use for a stake and sprinkle the wine over.

Start rolling tight the mutton with the fat outside. Salt the exterior surface of the leg, bit by bit, while you roll it. Put it in a covered vase in the fridge for 4 days. The mutton will let a juice. So, turn the whole surface of the meat through that juice once a day, and then roll it back.

When done, hang it in a cool, dry place for a night. Ready to eat or prepare (read more downside the page).

First of all, this is a traditional recipe that I never tried. I took it from an old Romanian cookbook (1841). In fact this is the first cookbook printed in Romania.

Second… yes, you red it right. It’s about whole veal. As I know, the meat from a veal has to weigh about. So, you’ll have to adjust everything to your needs.

Give them plenty of salt and leave them in a trough for 8-10 days. Turn them upside-down 2-3 times a day.

Then wash the meat in three water and put it under press: one cotton towel at the bottom, then the meat pieces one next to the other, another towel, a wooden platter (or more, to cover them all) and a big heavy rock . Keep them this way for 24 hours.

Mix in the wine the saltpeter (Potassium nitrate), the cumin powder, the garlic (crushed ) and the hot peppers (made powder).

Rub the pastrami with this paste and then let it to take a good whiff for 2-3 days, in the trough. Turn it over and over again on both sides.

Drain it and place it in wind to dry well (for one day), then hung it in a dry and cool place.

First of all, it’s a fat goose. What does this mean? We call it gobbled goose. I remember my grandma doing this. Before cutting the goose, she gobbled it with corn until its goiter was full three times a day for two weeks.

Some people cut out the skin and the bones from the chest and legs. Others prefer to let them the way they are. In this case, you have to make some incisions where the meat is thicker.

Rub the goose with one tablespoon of coarse salt and one tablespoon of saltpeter. Make brine from all ingredients and put the goose inside for 3 days. Dry the meat and wrap it first in a rare canvas, then in a thick paper (like that for shopping bags). Tie it, and then give it a cold smoke (made from straw) for 10 days.

Let it dry in the wind for 3 days. It’s great to eat it with scraped fresh horseradish over.

Romanians eat the pastrami the way it is, as an appetizer or added to the omelet, or in any other dish based on meat. 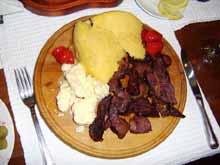 Also, for long time keeping, you need to smoke the pastrami. It has to be cold smoke, made from hardwood sawdust and kept for loooong time (3-4 weeks). You’ll never have the same taste with those modern grills.

You can also cook it on the grill. Try it with mamaliga, branza de burduf (what I think you won’t find, but you can replace it with feta) and pickled hot peppers. And a glass of red wine, too. In fact, we love it with unfermented wine.